The gestation period for cats is normally somewhere between 60 and 68 days, which means Lizzy was impregnated on or before January 28th. We estimated that Lizzy was born around July 30th, 2009, and that the oldest males (Opie, Roscoe and Kibble) were born around July 15th. This means Lizzy was six months old when she got pregnant, and the father was at most six-and-a-half months old. Six-and-a-half months is far sooner than the average eleven months written about in our veterinary handbook.

We noticed Lizzy’s belly on March 18th, and took her to the vet the next day. The vet confirmed our fears. Then, we were all surprised when she give birth just ten days later.

I feel very embarrassed and ashamed that we didn’t even prevent unwanted pregnancy among our own cats in our own home. Our vet says we shouldn’t be so hard on ourselves. Had we not rescued these kittens, all the females that managed to survive would likely be pregnant by now anyway. Yet knowing that doesn’t change how I feel. I should have payed more attention to what was going on. I should have done my own research online and tried to locate an assistance program for the boys myself, instead of just allowing my wife to wait on those who’s time was already taken up courageously fighting the valley’s homeless cat problem. In a way, I feel responsible.

Ally is of a shy temperament like her mom. She has a vulnerable innocence about her. She’s a lovable little girly girl. 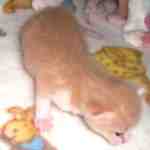 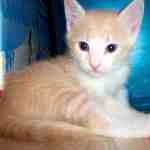 Peaches is a bold and rambunctious girl. She plays with great enthusiasm. She loves to wrestle. 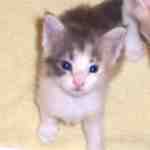 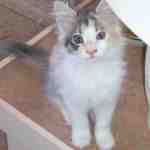 Lilly Bella is a character. She is a very sweet, bright-eyed little girl who enjoys being the center of attention. She likes to sit with me on the couch and expects to be the first to sample my food. 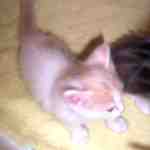 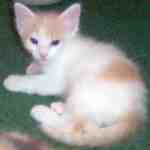 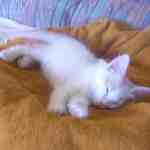 Carmella is a character too. She is confidant, outgoing and very lovey. She likes to run up to us and rub against our legs as she rapidly circles and purrs. With her, we must be cautious where we step. She’s a fast one. 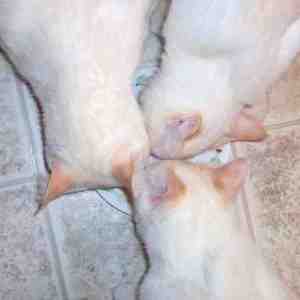 As Cotton, Ditto and Buddy grew older, a little bit of orange coloring appeared on their ears, back and tail. I call them my Orange Creamcicle Trio. They all three look nearly identical except in the eyes. Ditto is not cross-eyed, Cotton is a little cross-eyed and Buddy is very cross-eyed. This is how we tell them apart.