Duddly returned home today after spending four days at the vet’s. It seems he has FUS. Of all the male cats in our house who could have gotten FUS, it thankfully turned out to be one who has his own litter box. As male cats became blocked, their litter clumps became smaller and smaller which can alert an observant owner to the fact that there is a problem. All our other male cats (except for Simon of course) use shared litter boxes, so unless we just happen to see one of them straining to pee, we might not find out until it’s too late. (When I was in high school, My cat died from FUS because no one caught it in time.)

One day, when our sanctuary is complete, the cat tracking system there will be able to watch out for certain symptoms in all the free-roaming cats. Since we don’t have that yet, we rely on GOD to use some other way to make us aware of any problems. Our vets have commented to us that, unlike a lot of pet owners, we thankfully seem to discover most health problems in the early stages. Well, that’s not us; That’s GOD.

The vet had us give Duddles antibiotics, but they didn’t help. He eventually became completely blocked. So, he spent four days at the vet’s having his bladder flushed out which put us another $1,300 deeper in the hole. Now he is on a veterinary diet to help prevent any reoccurrence.

Oh — by the way, Duddly’s ear problem has completely disappeared. (See Part 1, Page 8 of our story.) There’s a bit of good news.

Dakota has not been very happy living in our home. Peanut and the others have continued to intimidate him. No mater how many times we’d rescue Dakota or scatter the others, they’d come right back. This situation has become so frustrating and my lack of a resolution, disappointing.

My wife showed a photo of him to a fellow director who was looking for a male cat, and she was very interested in him. So today, Dakota was taken to meet her. He crawled into her lap and she fell in love with him right away. I hope he has a great life in his new single-cat home. We have been invited to come visit. I hope we can do that soon.

Take care big-D. I will miss you very much.

Louie has been sneezing a lot lately and now Muffins isn’t doing so well. His blood sugar levels are getting high again and he is having trouble breathing through his nose. I’m starting to notice symptoms in others as well. It looks like another virus has somehow managed to invade our home. This one doesn’t seem as bad as the Stomatitis that hit at the end of 2008 — at least I’m praying it’s not. We aren’t able to fight this one as effectively. We have many more cats this time and not enough quarantine space. Plus we’re much more tired now. 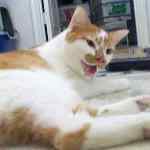 We are doing the best we can, but more and more cats are getting sick. It has hit Opie very hard. Many of the others are having difficulty breathing because of blocked sinuses, but Opie’s bronchial tubes have also been severely affected. He won’t eat or drink on his own and he is coughing up a little blood. It’s hard to watch him cough. It seems to hurt him badly. We are giving him two oral antibiotics and keeping him hydrated with subcutaneous fluids. He will also lick chicken baby food from my wife’s finger. Opie has been to see the vet twice now. He was even given a steroid shot, but that didn’t appear to do any good.

Each day someone new exhibits symptoms and gets added to the treatment charts. With so many to treat, my wife has been getting to work later and later each morning. I’m grateful that her boss is understanding. I am so tired now. All I want to do is sleep. 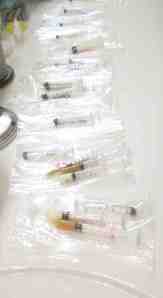 Because this is a virus, there’s not much we can do about it. It’s almost impossible to keep surfaces disinfected with all the sneezing. Plus, the majority of the house is carpeted which just traps and holds germs. I don’t like carpet.

We are washing the water bowls frequently and giving everyone lysine paste to support their immune systems. Those who are symptomatic receive the paste in a dollop of canned food. To prevent secondary bacterial infections, we’re giving antibiotic eye drops to anyone sniffling or sneezing, and oral antibiotics to anyone coughing, hoping others won’t get as bad as Opie.