Great news! Duddly has recovered nicely. He even got better faster than some of the others. Looks like this virus has run its course. In the end, everyone got sick except Suzy and Simon. What a potent virus. We have no idea how it got in our house. It sure wiped us out though. If it weren’t for the money that the landlord just paid us to turn over one of his rentals last month, we would not have had enough to pay our own rent this month. Once again, GOD made sure we had just enough money when we needed it. We are still scraping by.

Here is some more happy news! Blue has finally found a permanent, loving home. A co-worker of my wife’s just lost her cat of 19 years to cancer. The loss was especially difficult for her husband. It has been more that a week since the passing and he has deeply missed his furry friend. His wife decided to surprise him with Blue. 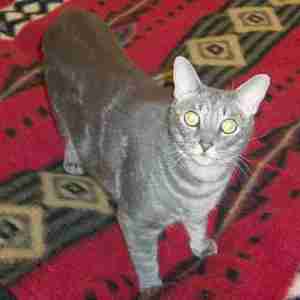 Blue lived with us for just over three weeks. I played with him and gave him some treats a couple times a day. He slept beside me each night (and sometimes on my stomach). He is a sweet little guy who likes to be petted a lot, and we became very good friends. It was hard to say goodbye. I prayed that GOD would provide for him a home where he would be dearly loved this time. Then for some reason, I imagined what a truly loving person might say about Blue once introduced. Wouldn’t you know it, the man who got him said those every same things, word for word. I am so happy for Blue. Thank you GOD for helping him.

Now that our 51 Cats story is online, I am going to close this journal. From here on, I will attempt to write blogs instead.

At the beginning of 2010, when I wrote our story, we had 51 cats. Now almost nine months later, we stand at 57. Even though the number of cats we have keeps changing, I don’t want to keep updating our online name. One day, we shall be know by the name of our sanctuary instead. But for now, we are 51 Cats — and counting.