For six-and-a-half years, my wife and I lived in a rural area just outside the southern city limits of Mount Vernon, Washington, surrounded by farm fields, a popular dumping-ground for cats.

When the time came that my mother realized she could no longer properly care for her four old kitties, my wife and I took them into our home and hearts without hesitation. They were our first cats together and we grew to love them dearly. Being elderly, they did not live with us for very long. As each one passed away, the experience was so painful that I began asking GOD to please not send anymore cats our way, because we get so attached and have such trouble saying goodbye. With GOD, all things are possible. He could have easily steered us clear. It would seem He has other plans —

One fall afternoon in 2001, I was walking past our garden when I noticed a hungry stray standing in the compost pile. There was a large piece of rotten lettuce dangling from her mouth which she was attempting to eat. The instant she saw me, she dropped it and darted away. Never before had I seen a cat so hungry as to eat garbage. Feeling pity for her, I put a bowl of dry cat-food next to the compost pile, but by that evening it had not been touched, and I could not leave it out overnight because of the racoons and possums. I wished she hadn’t been so afraid.

One evening not long after, as I opened the front door, I found her eating some dry cat-food we had set out on the front porch that day for our old kitties. Just as before, when she saw me she quickly turned and ran down the stairs. I felt bad that I had disturbed her yet again, this time depriving her of a decent meal.

Then unexpectedly, when she reached the bottom of the stairs, she stopped. And, like a scene from Oliver Twist, she turned around, took a step forward, looked me in the eyes and meowed in such a way as if to say “Please sir, I’m so very hungry.” The scene gripped my heart. I knelt down and called to her gently and she approached to a point, hopeful but not quite trusting. I placed the bowl in front of her and sat there silently while she finished the dry food. My wife, who had been observing, quietly brought out some canned food and we gave the kitty a little at a time until she had eaten nearly a whole 5.5 ounce can. Then, she walked away into the night.

We both felt concern for her but weren’t sure what we should do. So, we decided to “set out a fleece.” My wife put a soft towel inside a clean, covered, litter-box and I placed the box on a work bench just outside the back door on the other side of the house. If this cat was meant to stay, she would find it and move in. Otherwise, she would go on her way.

The very next morning, my wife went out the back door and found her sleeping in her new warm bed. We began feeding her regularly and eventually we were able to pet her. Over the next few months, we would periodically open the back door and invite her to come in. One day, she finally accepted. Now, Nicki sleeps with my wife most nights. 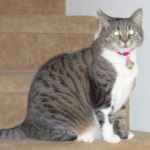 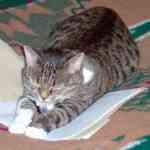 One afternoon, may months later, Nicki had come in after spending the morning outside, and was sitting on the couch, which of course is nothing out of the ordinary. Yet, as I walked by her, I got a strange feeling. It was as if something was wrong, but I couldn’t put my finger on it. I happened to mention the odd feeling to my wife who became adamant that we examine underneath Nicki right away. I didn’t see why. Snickers looked fine, and it was just a passing feeling. But, my wife insisted. Sure enough, Nicki’s skin had been slashed wide open in several places under her arms and on her belly by something very sharp.

At the vet’s office, she laid perfectly still as Dr. J. sewed her up without anesthesia. He was very impressed with her. The cuts were smooth and straight, so the 22 stitches were done in no time. She healed quickly with no complications. We never did find out the cause.

About a year later, in September of 2002, my wife held a 40th anniversary party for her parents at our place. That evening, after the majority of the guests had departed, another stray showed up. He was a full-grown tom who didn’t seem all that afraid but kept a respectful distance from everyone. He sat down near me and looked up at me as if he expected something, so I asked him if he was hungry.

Earlier that day, I had seen people throw away uneaten pieces of grilled chicken. So I tipped over the garbage can and started rummaging. The stray tom walked over, sat beside me and waited patently. I kept placing bite-sized pieces in front of him until he was done. He ate what amounted to about three chicken breasts that night for his dinner. I guess he really liked that since he decided to stay.

A day or two later, I took a chance and reached down to pet him on the head. Suddenly, his personality totally changed. He acted as if being petted was the greatest discovery ever! He just couldn’t get enough and would rise up to meet your hand. No matter what you were doing or holding, his head was going to be under your hand. So, watch out for your drink!

Later, I was napping on the couch as my wife opened the back door. Suddenly, this happy tom, who had never been in our house before, darted past her, ran down the hall and, to my surprise, leapt right onto my stomach. Now let me tell you, that there is one heavy cat! He’s been a lap boy and a couch potato ever since. Chester is our gentle giant. 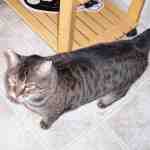 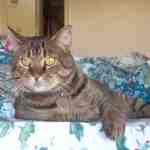 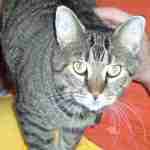 One morning I let Chester outside and set some dry food out for him. Later that afternoon I opened the back door and there was Chet looking up at me with a very concerned expression. I wondered what the problem was. Then, he looked down at the bowl at his feet and back up at me again as if to say “a little help please.” That’s when I finally saw. Right there at his feet were three baby possums all in a row munching on cat food, totally oblivious to the gigantic cat standing directly over them. Chester looked so concerned. I laughed. I wish I’d had a camera. That was such a greeting-card moment.

One very rainy night in late January 2003, my brother-in-law was driving in town when he noticed water flowing over something laying in the gutter. He investigated and discovered an unconscious five-month-old kitten with a broken tail, bruised hip and bloody eye. He immediately brought the kitten straight to our house and left it with us. We put an ad in the paper, but no one responded.

The kitten’s spine was severed, so his tail had to be amputated. The vet we took him to (not Dr. J.) said that tail amputations are easy for cats, but that was not to be the case for him. He must have been in such terrible pain. For weeks he kept viciously attacking his stub. He would roll around screaming and biting at himself. Even an e-collar couldn’t stop him. We had to take him back to that vet several times to be treated and re bandaged. He eventually chewed the squared edges off his own tail. Once he healed, the pain seemed to subside, but to this day he doesn’t like anyone to touch it.

Eventually, my wife found a woman who was willing to adopt him, but at the last minute the woman changed her mind. That’s probably just as well since the accident also left Spud with what our current vet calls an “angry bladder.” Urination is painful for him and he bleeds from time to time. So, he often urinates in inappropriate places looking for a way to escape the pain. Obviously, whoever would own Spudski would need to have lots of patience and understanding. I guess GOD decided we were up to the challenge.

We have no way of knowing if Spudski’s daily discomfort is great or small. Some days he seems to be in a bad mood, but over all, he is a very sweet little boy. We pray that one day he will be granted relief. Hang in there Spuddy Buddy. 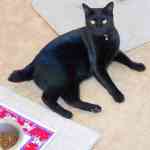 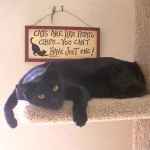 Spudski loves to climb into your arms and be held like a baby. Spud also has a girlfriend named Bear. She is a stuffed animal/hand puppet that we found at the thrift store which is just about his size. He loves that bear, and often calls to her and sometimes carries her around.

Around 11:30 P.M., on the night of December 10th, 2003, my wife and I were driving home on a frost-covered country road when a kind of Christmas miracle happened. Just minutes from our driveway, we passed a little grey kitten sitting on the frozen slush near the edge of the roadway. The kitten was looking up and down the road as if waiting for a ride. As we passed close by, he took no notice. Even when we pulled over, he ignored us. He just kept looking right and left as if he was expecting someone in particular to appear out of the darkness at any moment.

I decided to open my door and lean out to look back at him. Only then did I have his attention. For a few moments, I just stared at him and he at me. Then, something happened that is hard to explain. He meowed once at me. Just once, that’s all. But, something in that desperate sound he made took hold of my heart, and for some reason I automatically held open my arms and answered “of course I will.”

He immediately sprinted toward the car door, jumped in the car, ran up my chest, started rubbing his face against mine and just kept howling and howling. I’d never heard a cat sound like that before. It was like he was crying and saying “thank you, thank you, thank you” over and over. I thought “I can’t believe this is happening” as the tears welled up in my eyes.

When we got him home, I stayed with him on our bed while my wife made him a plate of wet food. When she gave it to him, he started howling all over again while he was eating, like he was starving and had never tasted anything so good. I think he was thanking GOD. He has never howled like that again, although for a long time afterward it appeared as though he was always smiling. I think I made him a promise. We are very close. He is my special boy. 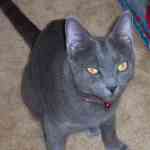 Peanut loves to ride on my shoulders. Nearly every morning, he reaches up and hugs my leg, waiting for me to pick him up. When my hair is still damp after a shower, Peanut likes to climb on my back, grab my head with both paws and lick my hair. Oh, and he’s just crazy for teriyaki flavored beef jerky.