These three cow kittens were the smallest of that first litter of eight. They had a more difficult time than all the rest. 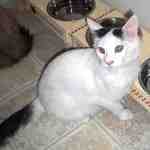 Mouse was the most sickly of the three. For the first few days he slept all the time and barely drank anything. He became very weak and dehydrated. A vet tech told us to force some corn syrup into his mouth and give him tiny squirts of water from a one-mil syringe. That did the trick. Now look at him. He is just terrific.

Mouse is just a temporary nickname. When he gets a little older we intend to call him Mickey so that the other school kid-ttens won’t make fun of him. 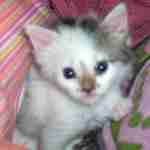 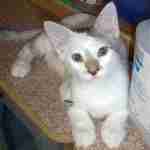 Pippin is a happy-go-lucky boy. He seems to love life, like the world is his oyster. Sometimes my wife calls him “Pip Pip Hurray!” 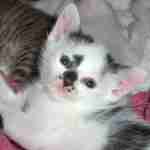 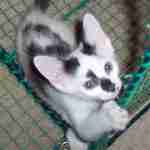 We named this little guy Squeaks because, unlike the rest, when he was a tiny kitten he had this very cute, low, squeaky voice.

Cotton and Ditto are identical twin boys that, as kittens, resembled fluffy balls of cotton. We had no trouble identifying them at first because Cotton always yelled the loudest for his milk bottle. But now we have a much more difficult time telling them apart.

Lizzy started out a little shy and hesitant, but now she is just one of the gang. She and Twinkie are BFFs (Best Friends Forever).

Twinkie is a very affectionate girl. She loves to follow us around the house whenever we clean litter boxes. She’s our little helper — sort of.