These five all came from the youngest litter. When they were around ten days old, their mother abandoned Buttons, and the next day, Tigger, in the middle of an open field. Each one screamed nonstop like a police siren until they were picked up, brought to our place and finally fed. I’d never heard such a loud noise come out of such tiny things.

Their mother was able to raise the other three. When they were old enough to accompany her to the food bowls, one-by-one they were trapped and reunited with their litter mates, so that they too could have a chance to grow up tame.

Buttons thinks we are her parents. She is always so happy to see us and she comes to us when we call her name. She likes to rub her face against ours. When she was about four months old, she caught pneumonia, but she takes medicine like a champ. She’s doing fine now. 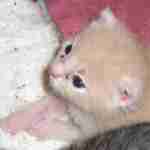 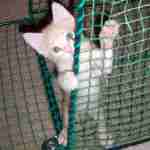 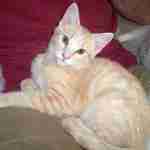 Tiggers are wonderful things, aren’t they? When he was still on the bottle he’d often try to suck on my ear. He is our little shadow.

When Buddy was trapped and sent to us, he was only afraid of us for one day. Then literally overnight, he became the most trusting and friendly cross-eyed little boy you could ever hope to meet. That’s why we call him Buddy. 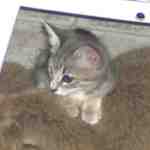 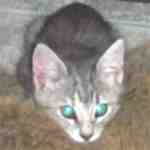 It took Missy about a week to trust us. She is still a little shy, but we’re working on it. The older she gets, the more she looks like Buttons. Sometimes I can’t tell who’s who unless they are standing side by side. 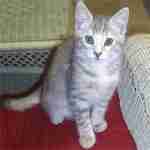 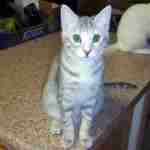 Mia was the last kitten to be trapped. Because she was caught so late, it took her the longest to tame. But, she eventually came around. She likes to lick and bite our toes.

After these feral colony kittens came to us, and we reached 51, no new cats have shown up — so far — (This story was written in the 1st quarter of 2010.)

In late November 2009, Muffins became diabetic again. After what we had already been through with him, it was hard not to feel discouraged.

The vet wanted us to switch him to an expensive prescription diet, but that food had grain in it. I decided that I wanted to try a food that had zero or at least very little grain in it this time. Lets just say I had one of those feelings.

We switched Muffins to a grain-less wet-food and within days his pancreas was working again. Maybe it’s just a coincidence – I don’t know. For now, we are monitoring him closely. If we could afford it, I’d put all our cats on a high-meat-protein, very-low-grain, wet-food diet.

Although we have had to endure our share of trials with these cats, each one occurred in its own time. As GOD promised, He never gave us more than we could handle – even though sometimes, from my perspective, it sure felt close.

Dr. J. used to say that cats can tell those who are kind. Perhaps he’s right, or perhaps GOD points us out. As our number grew, I often thought “hopefully this is the last one. I don’t believe we can take on any more.” But, whenever someone new came along needing help, I didn’t say no. – Well, maybe a little at first, but soon after I always thought better of it.

For me, the story of the good Samaritan speaks of actions – taking pity, showing mercy, loving your neighbor as yourself. In our neck-of-the-woods, we’ve never come across an unconscious man lying beside the road, a victim of bandits who took everything including his clothes. But, we have come across more than our share of homeless cats, some who were thin and hungry, some who were depressed, some who were injured and suffering. We’ve never gone looking for them, but during each moment, when our paths crossed, when we came face to face, in our hearts we felt like we were being asked to make a choice, perhaps not unlike that Samaritan of 20 centuries past.

While I have wanted to so many times, I know better than to say “I can’t” when GOD places a burden before me, because deep down, I know that “I can’t” spiritually translates as “I won’t.”

Over these past 10 years, despite my resistance, I can feel that I am slowly being transformed into the kind of man who is both accepting of his circumstances, and willing to go where he is led. Sure, like anyone, I have my own dreams. But I have told GOD many times that I am willing to give them all up and be content with whatever He has planned for me. I feel a kind of settled peace about it.

The love that I have for these cats – these fuzzy kids of ours – has encouraged my relationship with my creator to grow even stronger. Their suffering, real or potential, has motivated me to reach out to GOD many times and to want to stay close.

On The Inside: All our cats are healthy and loved and live indoors with us. Every day, we clean all their litter boxes and give them plenty of food, fresh water and lots of attention. Even though we have financial difficulties, we take them to the vet when they need it and administer medications when necessary. Every adult male is fixed and most of the adult females as well. Nearly all the adults have had their shots. Now, our next challenge is to figure out how to get all 22 kittens fixed and inoculated.

On The Outside: Our cats are not a noisy nuisance to the neighbors and they do not cause the neighborhood to reek of urine. The next-door neighbors say they wouldn’t know we have cats, except for seeing them in the windows. The way I see it, we accumulated these 51 cats because we just couldn’t turn a blind eye and walk away. Then, we quickly grew to feel a strong sense of guardianship toward each cat, and became far too attached to easily say goodbye. Yet, GOD knew we would from the very start.

It took over seven and a half years to reach 28 cats, then in just five weeks we gained 23 more. I call that “practically doubling overnight.” We can’t continue to stay in this house, nor can we move anywhere zoned residential, because our house is not a home anymore. It has become a cat sanctuary.

Thank you for reading Part 1 of our story and getting to know our family.

Note: I had finished writing “Part 1 – Our Family” in March, 2010. Then I wrote “Part 2 – The Sanctuary Hope” and “Part 3 – The Sanctuary Dream” and was finally able to publish it all on WordPress in late August. During the five months in between much has transpired here at home.

I recorded the events in a journal and have also published it here. Think of it as a continuation of Part 1 of this story…