In late fall of 2006, my wife took some vacation time and went back to Washington state to help her aging parents handle some difficult matters. While she was there, she stayed at her brother’s house where she met a very lonely, unwanted kitty that had been more-or-less forced on her brother. They quickly became best pals. Throughout her stay, the kitty would hang out with her during the day and cuddle-up with her each night. They were a great comfort to each other while she was there.

Because this kitty and my wife had bonded, and her brother planned to get rid of the cat right away, the kitty came back with my wife to Arizona instead, and on the 9th of December 2006, Pumpkin joined our family and stepped into the good life. 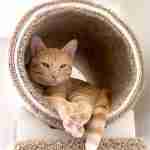 Pumpkin had been raised around two large unruly dogs, so when he came to live with us, he was a bit rough with the other cats at first. He eventually adjusted. Now he’s one long, sleek, mellow guy. He is our longest cat.

In late January 2007, a cute but dirty cat showed up meowing at our patio door. I’d stopped questioning “why us?” anymore. My wife felt strongly that something was wrong with him and said he needed our help. I said “no he doesn’t. He’s just curious about our indoor cats.” So, I brought him in, and of course, he wanted nothing to do with our cats. He just stood at the patio door and meowed. I let him back out and he turned right around and kept on meowing at the door. I’m embarrassed to say that we went back-and-forth like this for more than a day until my wife finally had enough and insisted we follow her heart and take him to the vet. Sure enough, he had a very large and painful abscess in his chest which had to be drained and took a couple of weeks of antibiotics to treat. After that, we had him fixed.

During this time, Fox (so named because his face resembles the Nintendo video game character Star Fox) lived in our garage. We grew to care about him very much, but he was not fitting in as had all the other cats. He just did not want to live around other cats, and he didn’t like being left alone in the garage either. It was painfully clear that GOD had other plans for Fox. I had no idea where his journey to find a home would end, but I knew that I would miss him. I asked GOD if I could at least be allowed to see the end result of His plan.

At the assisted living facility where my wife works, in a small apartment by himself, there lived a widower who loved cats. This elderly gentleman attended few activities and mostly stayed in his room. When Fox was given to a female resident there, this man came to visit them regularly. Not long after, the lady passed away, and Fox went to live with him. Fox was renamed Whiskers and they are now the absolute best of friends. Whiskers is quite content being the only cat in a small apartment with an affectionate owner who is there most of the time. And his owner gets out and socializes much more often and seems to always have a big smile on his face. 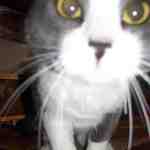 It has done my heart good to see such a change in them both. Not only that, but I get to bring Whiskers new scratching posts and feather toys and even trim his claws from time to time. And I try to remember not to call him Fox.

One morning in March 2007, I discovered that during the night the cats had dislodged the doorstop that we used to hold the spring-loaded garage door open.

I originally had an uncomfortable feeling about using that doorstop because I recognized that it was not a foolproof method. I felt I should devise a more secure method since this door is heavy and might cause a serious injury. But, I didn’t. I took the easy way and continued to use the commonly accepted, convenient method instead of developing a safer one right away. I took a chance. I gambled.

For a long time the doorstop method worked well and I had put it out of my mind until that morning. After seeing that the door had closed, that uneasy feeling returned and I finally decided to come up with a better way to hold the door open. But it was already too late —

A day or two later, I noticed Daisy acting strangely as if an invisible cat was chasing her. Then, I saw her attack the tip of her tail just like Spud had after his amputation. On the outside, her tail looked normal but an examination revealed that the last two vertebrae were deteriorating. 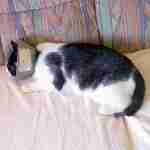 The vet removed the tip of her tail. This vet also said tail amputations are no problem for cats, but just like Spud, Daisy was the exception. For awhile she had to wear an e-collar to keep from biting herself. Now and then, she still runs wildly through the house as if she’s being chased, stops and attacks her tail and then finds some narrow out-of-the-way place to hide for awhile.

Even if there was some other explanation for the deterioration, I still believe that GOD was using it to teach me not to take chances, not to choose the easy way, but to always listen to my heart and do what is right, no matter how difficult or inconvenient. I am so sorry Daisy.