On Saturday, October 4th, 2008, my wife and I were asked by our landlord to clean one of the other houses that he owned in our neighborhood. We walked over to the house and found that the tenant hadn’t quite finished moving out yet. She asked us to please wait and come back the next day.

As we turned to walk home, a friendly, skinny cat came out from under the moving van and started rubbing against our legs. She looked up at us and kept meowing. She seemed quite hungry so I ran home and brought back some canned food for her. When we inquired about her, we were informed that she had lived at the house on the corner across the street, but that her owners had moved away about a year ago leaving her behind. Until we showed up, no one had lifted a finger to help her.

This part of the neighborhood was only about three years old and already so many houses were being foreclosed on or put up for sale or rent. Apparently this little kitty was just one of the soon-to-be-many victims of the housing-market collapse. For awhile our housing development became almost like a ghost town. We later heard from some of the neighbors that the strays were surviving by sneaking into their backyards and eating dog food while the dogs were inside.

Wendy was already fixed, and sadly, she had been declawed. This made her abandonment seem even worse. We later learned there is a high probability that she is from the same litter as Daisy. (Frankie, Johnny, Tippy and Jack, say hello to your Aunty Wendy.) 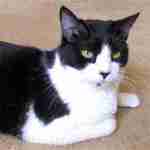 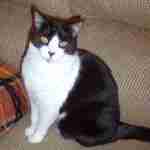 Wendy doesn’t like it when either or both of us go out onto the patio. She reaches up, puts her paws on the patio door and cries at us until we agree to come back inside.

The very next day, on Sunday, October 5th, 2008, as my wife and I were walking back to our landlord’s other house to start the cleaning, we were approached by yet another cat. This one was a four-to-five-month-old kitten. She kept meowing extremely loudly as she approached from across the street and circled around us. She fixated on us and wouldn’t leave. It’s like she was so hungry that she was literally screaming for someone to notice her and help her.

I ran home, brought back some canned food and tried to get the kitten to trust me enough to eat. Once she was eating, I was able to get close enough to pet her and eventually pick her up. At the same time, my wife went to inquire about the kitten among the neighbors and learned that the kitten had been wandering through the neighborhood, howling for days, all the while no one investigated or did anything to help her.

Of course, she had no collar or implanted microchip, and of course, none of the neighbors knew where she came from. After we brought her home, we avoided going out into the neighborhood, and hoped that the landlord would not ask us to clean any more houses. 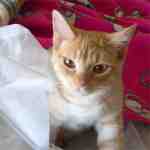 Purrl is a lovely little girl, and if you sit still long enough, she will try to groom you all over with her little sandpaper tongue.

Just three days later, on Wednesday morning, October 8th, 2008, my wife was on her way to work when a truck directly in front of her drove over what looked to her like a piece of paper flipping around in the wind. But, when she was already too close to stop, she discovered that it was actually a terrified little kitten trying to decide which way to run. She slammed on her brakes and heard a thump.

Horrified, she looked in her mirror and saw the kitten’s body flopping violently on the pavement. She pulled over and ran back to the kitten which was now laying motionless. Apologizing and crying, she picked up its limp body, carried it back to the car and placed it on her lap. Blood was coming from its mouth and its bowels released on her dress. Seeing no sign of life or breath, she decided to take it home to bury it.

Knowing that with GOD all things are possible, she prayed desperately for a miracle as she drove. Then, when she was almost home, the kitten raised its head and looked at her. She hurriedly drove toward the nearest vet. And, the very moment she stopped the car in front of the vet’s office, the kitten sat up.

An examination revealed that the kitten had only lost a few loose baby teeth and had two small hair-line fractures in his lower jaw, which would heal without a trace in just ten days. Other then that, there was not a scratch.

Based on his physical condition and stomach contents, the vet surmised that Simon was, most likely, a six-month-old feral kitten who was doing his best to survive. He weighed barely two pounds. 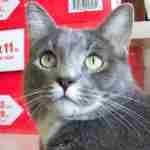 When Simon was later examined by our regular vet, he tested positive for the Feline Leukemia Virus (FeLV), which means that he has a much lower life-expectancy and must live a more isolated life. That hit us pretty hard. But we keep praying for him. We love you Simon.