In November 2008, a stomatitis infection broke out among our cats. It attacked so fast and spread so quickly. It took us completely by surprise. Nothing like this had ever happened to us before. It would create an abbess on the end of the nose and extremely painful blisters in the mouth and throat. For the most part, cats are pretty stoic, but this was too much. Those infected avoided food and water. Some stopped swallowing and just laid there and drooled. Others frantically clawed at their mouths.

We immediately disinfected the entire house with bleach and alcohol. Anything that a cat had touched was either washed or removed. We established seven quarantine zones and followed strict sterilization procedures between each zone. We washed our hands so often with alcohol that our skin started to crack.

We regularly administered subcutaneous fluids to those that were dehydrated, and we had to force antibiotics down their throats, which was so emotionally difficult for us, because it hurt them terribly. The stomatitis attacked Izzy’s nervous system, causing her to limp around on two legs. Frankie got so bad that he had to stay at the vet’s for three days. This infection was tough and it hung on for weeks. For awhile, it seemed like it would never end. We prayed a lot during that time and we just kept on fighting. It drained us, body and spirit.

In the end, the quarantine zones worked well, limiting the outbreak to eleven cats (Purrl, Pumpkin, Frankie, Johnny, Tippy, Jack, Sammy, Spud, Izzy, Clara and Sunny), and they all recovered with no lasting effects. This was an experience I hope we never have to go through again.

Reaching Out In Faith

When we first got Simon, we kept him isolated for a long time. Later, when we thought it was OK, we introduced him to the general population before having him tested — in hind sight, that was a very stupid thing to do. Before that time, no cat of ours had ever tested positive for a virus and I was more concerned about wasting the money than doing what was right. So, I foolishly put it off. I regret that now.

I realized that by avoiding the cost of one simple test, I might have just doomed 22 of my family members to a life of suffering and early deaths. For days, I felt very afraid and sick to my stomach. I earnestly begged GOD over and over to forgive me and to please protect my family.

Over the years I’d heard people talk about how, during times like this, when they’d asked GOD a question, they’d sought the answer by opening the bible to a random page and blindly point their finger at some text – like throwing a dart at a map. I’d never done this before and the thought of it felt strange and uncomfortable, even a little silly. But, I was so distressed and needed so badly to be comforted.

I located a bible but felt compelled to grab the book on top of it instead. I found a quiet place to be alone and, although I still felt kind of awkward, I begged GOD one more time to please, please help me. Rather than opening to a random page somewhere in the middle, I started near the beginning.

The book described a man standing in a library gazing at a painting of a leper who was suffering in pain and looking to heaven for help. Below the painting was a small caption. As I whispered the words from that caption in my mind, it was as if some other quiet voice spoke them with me. This silent voice gave those words such power and permanence, like they were an impenetrable wall of solid diamond. The caption simply read — “I will.” — My heart burst open like a floodgate and I wept. Not one of our cats contracted FeLV.

One day in late Fall 2008, a big grey tom showed up at our place and decided to call it home. Each night he slept on the gravel under a bush in front of our house, and each morning he went off on his daily rounds. Eventually, we noticed that he seemed to be getting thinner and his ear looked infected. We laid a piece of carpet down for him and began carrying a plate of wet food out to him each morning. He sure did like having room service. 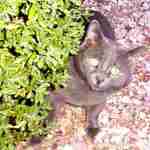 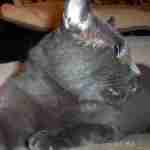 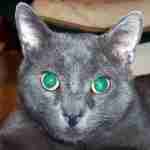 Gradually, as he grew more trusting, he began hanging around for longer periods during the day. Months later, we invited him into our garage. Duddly has been an indoor kitty ever since. Duddly struggles with a chronic condition that causes fluid to continuously drain into his left ear. We tried various antibiotics and successfully treated the initial infection, but for over a year now, the drainage had not ceased.

In the 1st week of May, 2009, Muffins developed a very painful case of pancreatitis. It was the most severe case the vet had ever seen. The infection had caused his pancreas to shutdown completely and his blood sugar levels became very high.

We administered subcutaneous fluids, antibiotics and insulin shots and we attempted to force feed him with a syringe. Despite our best efforts, he grew weaker and weaker until he could no longer maintain his balance or hold up his head. He needed our help just to walk to the litter box and we held him up while he used it.

The vet grew concerned and took over his care. For many days, Muffins was monitored around-the-clock. During working hours he stayed at the clinic and at night the vet techs took him home with them. For a while, they weren’t sure if he was going to make it.

Once his electrolytes had stabilized, we took over his care again. The vet had put in a feeding tube, so I ground up his pills and every two hours throughout the day I gave him food, water and medicine through the tube. It took weeks for him to recover. The vet said that Muffins’ pancreas might never function again, but we prayed that it would, and it did!

Casting the Die for Duddly

On the morning of May 22nd, 2009, we took Duddles to the vet to be fixed. That afternoon, the vet called us and informed us that Duddly had tested positive for the Feline Immunodeficiency Virus (FIV) This was a death sentence for Duddly. The vet said that, although there are a few shelters that might take FIV cats, these cats are normally just put to sleep on the spot to prevent the spread of this deadly and incurable disease. The vet then wanted to know what we would like to do. We were in shock. We both cried. We asked for some time to think.

Deeply distressed over Duddly’s situation, I pleaded with GOD to show me what to do. I am so grateful that GOD is there for us, especially in times like these. It helps to know that for Him this is not a crisis, it only feels that way to us.

After I prayed, I remembered a single, six-sided die that I had found on the road one day while walking to get the mail. Both the number-one and number-two sides had been completely colored black. It was otherwise in good condition so I put it in a drawer thinking that I would someday try to clean it up.

I knew that GOD controls the outcome of all lots, but I also remembered something about not foolishly testing Him. Nervously, I asked if it was alright that I use the die. I let side one and two mean that we were to give Duddly back to GOD. Sides five and six meant that we were to send him to a shelter for FIV cats. And, so as not to foolishly test GOD, sides three and four meant “no answer.”

It was so hard to drop that die. I knew that, no matter what, I had to do whatever GOD said. Yet, either path meant a painful goodbye. I had to close my eyes before I could do it. When I finally had the courage to look, I saw that side three was showing. I felt confused and a little hurt. I couldn’t understand why GOD didn’t answer. I really needed His help.

Just then, a soothing peaceful feeling came over me. It was as if, in a very gentle and patient voice, GOD was simply saying “wait.” From my limited view, I thought I had prepared the die properly, but obviously I had not. In my distress, I hadn’t even considered “waiting” as a possible option. I was a little embarrassed, but grateful for His gentle touch.

Feeling at peace, we retrieved Duddly from the vet, and still not knowing what to do, we began researching FIV and contacting FIV shelters, even some in other states. Every FIV shelter we contacted was full and could not take him. We also found out that euthanasia is completely unnecessary and a common overreaction made by most vets who are not well informed about FIV. If taken care of properly, a cat with FIV can live a full and healthy life without spreading the disease.

Duddles is such a big teddy bear. Thank you GOD for telling us to wait.